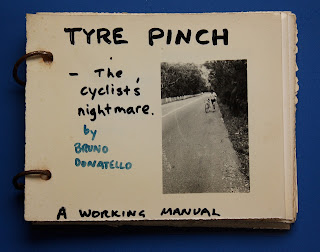 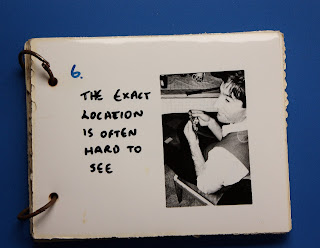 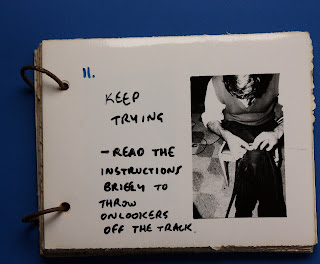 Tyre Pinch - The cyclist's nightmare resulted from a bike ride with Kurt Brereton from Sydney to Coalcliff in 1980 (exact date to be corroborated) which eventually ended at Ken Bolton's and Sal Brereton's house where Kurt (Bruno Donatello) took most of the book's photos. As I recall it was a long ride, it was awfully hot and I had a murderous hangover. My bike got a flat in the vicinity of Stanwell Tops and I accidentally pinched the inner-tube in an attempt to get the tyre off the wheel, a very bad thing. Kurt rode on to Ken and Sal's where he found Anna Couani who came to my rescue in her trusty VW Beetle (which must have had roofracks).
The booklet's 28 pages of photos and Kurt's pithy comments record the aftermath of my second-worst incident on a bike as well as being a pleasant reminder of happy times at Ken and Sal's now legendary house by the sea.
Denis Gallagher
Posted by Schmiko at 2:20 AM